Christchurch site opens its doors for pick up

Customers will be able to start picking their fertiliser products up from Ravensdown’s Hornby operation less than 48 hours after a fire affected the eastern end of its 14 hectare site.

After a massive effort from the team to make the site safe to access, customers will be able to order and collect product from 8:00am 11 October.

Yesterday’s fire, which damaged four out of Ravensdown’s 13 stores on its site, appears to have started during some maintenance work and spread along the roof line when a rubber conveyor belt ignited.

“The rubber belt helped spread the fire through the roofs of the four store buildings and caused the black smoke seen across the city,” said Chief Executive, Greg Campbell.

“The buildings affected were of new fibreglass construction and did not contain any asbestos. The cladding responded as it should, allowing emergency services to put the fire out quickly and safely from outside the building,” Campbell said.

The response of our staff was exceptional, ensuring the site was safe for the emergency response team. I also want to thank the emergency services for the way in which they contained the fire so quickly.

“Nobody was injured and buildings are insured and will be replaced. The contingency planning and emergency response of the team has been outstanding as demonstrated by being back up and running so quickly.”

He said the fire only affected building materials and conveyor structures. Ravensdown does not store explosive materials in any of their manufacturing plants. Two small bangs were likely caused by gas bottles being used for doing the maintenance work.

“We want to acknowledge the concern of the wider Christchurch community and disruption caused to our neighbours. We’d like to thank them for their patience and the many well-wishers for their support.”

Campbell said Ravensdown had good stocks of finished fertiliser products for the coming season and Hornby pick-ups would be of the same high quality that customers have come to expect. Though in the initial restart of service, customers could expect some congestion on site.

“As a proud member of the Hornby community since 1922, we are determined to rebuild, restore and improve the site as it eventually becomes fully operational.” 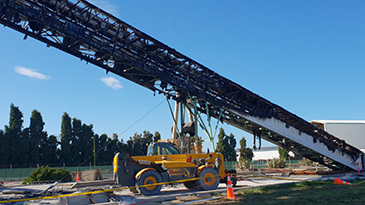