This year’s New Zealand Dairy Industry Awards witnessed for the first time in the event’s 33-year history one region sweeping the boards: Canterbury/North Otago finalists prevailing in all three major categories, as well as the Fonterra Responsible Dairying Award. Adding to that, the podium at the prestigious gala dinner event at Te Pae Christchurch Convention Centre on 14 May took on a distinct green theme, with each main title going to a Ravensdown customer.

Originally from the United Kingdom, 34-year-old Will Green is a 34 per cent share milker on a 270-hectare Dairy Holdings Ltd property milking 1060 cows at Hinds, Mid Canterbury. Will impressed the judges with his contagious energy, accuracy and his commitment to reviewing his business, looking for opportunities to learn. They complimented him as a great example of somebody who has come to New Zealand, recognised dairy’s opportunities and embraced a system completely unlike what he was used to back home. They also praised how he has fostered a strong team culture with his staff.

Another immigrant who has thrived on the opportunities dairy offers, Dairy Manager of the Year Jaspal Singh was an information technology student in India who came to New Zealand to further his studies in 2014. Joining the dairy industry in Mossburn the following year as a farm assistant, Jaspal is now farm manager on Mark and Carmen Hurst’s 220-hectare 800 cow Waimate property. His win rewarded an immaculately presented farm and a polished, professional presentation, which highlighted Jaspal’s knowledge and sense of responsibility for farm management and performance. Jaspal stood out as someone who is professional, detailed, diligent and possesses a desire to succeed, said the judges. Jaspal also ensured he gave recognition to Ravensdown Senior Agri Manger Hannah Wallace in his acceptance speech, thanking her for her support in ensuring he was ready for judging.

Dairy Trainee of the Year 23-year-old Peter O’Connor grew up on a Westport dairy farm, obtaining a Bachelor of Agricultural Science (First Class Honours) from Lincoln University. Currently assistant manager on Pye Group Ltd’s 242 hectare 900-cow Mayfield, Mid Canterbury property, he will move up to manage a 400-cow farm near Lauriston next season.

Peter’s maturity, capability and practical skills impressed the judges, who described him as an intelligent, perceptive and articulate generational farmer with an excellent understanding of the co-operative model and its importance to the industry.

According to the judges, Craigmore stood out in the Fonterra Responsible Dairying Award due to its focus on adapting individual farm systems to the land, resources and people involved. One of Craigmore’s philosophies is that there is no single perfect system, focusing instead on the people on the land and their motivations and goals for the land and animals. Leading change and using different innovations to help create solutions that other farmers could then use also impressed the judges. Craigmore innovations include dung beetles, work on significant natural areas, a composting barn, boluses and trialling Halter on one of the company’s farms.

Ravensdown is a national sponsor of the New Zealand Dairy Industry Awards, we had a great time hosting all 32 finalists at the Lincoln University Research Dairy Farm to showcase new greenhouse gas mitigating technology, EcoPond, and at the infamous Cocktail Function the evening before the gala awards dinner.

Congratulations to the major winners: 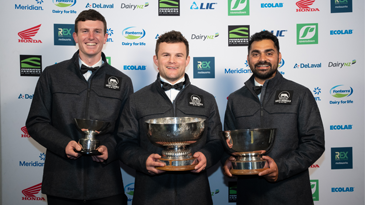