Nick-named ‘Dr Dirt’ by his peers, Ants was recognised recently at the annual Grasslands Conference for his excellence in agricultural soil science and service to the industry over his 40 years of practice.

"I’m deeply humbled to be recognised amongst my peers in this way for effectively doing something that I love and am passionate about. A lot of very worthy recipients have gone before me so I feel very honoured and pleased to be recognised," says Dr Roberts.

John Caradus, Chair of the NZ Grassland Trust, says each year the Trust awards the Ray Brougham Trophy to a person associated with the pastoral farming industries who has made an outstanding national contribution over their working career.

“Ants has developed though his working career an excellent profile that allows him to represent the grassland community effectively on issues related to fertiliser, soil and environment. He was a worthy recipient of the Trophy,” says Mr Caradus.

With a career spanning four decades, Ants has contributed to over 65 referred scientific journals and conference papers, 70 scientific and extension papers, 5 book chapters and 4 extension booklets and 8 educational YouTube videos.

If I had to compress 40 years into one highlight I’d say the best part of my career has been meeting the farmers of New Zealand on their farms and seeing how, and if, I can help them – that’s what gets me up in the morning – my why.

Ants, who has a BAgSci (1st Class Honours) and PhD from Massey and is a Fellow of the New Zealand Soil Science Society, says his role as a soil scientist in agriculture is to translate the science of soil fertility into words and actions that farmers can take on board and actually institute on farms – enabling smarter farming for a better New Zealand.

"Making soil fertility science as simple to understand and as effective as possible is where I have concentrated my efforts. If it is not done with the end user in mind then it renders less useful."

“The next frontier for me is to ensure that our pastoral farmers can continue to have a sustainable and economically successful business, producing high quality food from our soils in a nutrient limited world.” 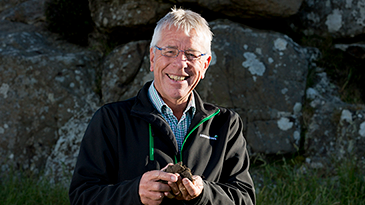