Former Ravensdown Board member Scott Gower is calling for farmers to step up and stay active in participating on boards of their co-operatives despite more demands being placed on farmers’ time.

Scott is a third-generation hill country sheep and beef farmer from Ohura near Taumarunui and retired from the Ravensdown Board last September after reaching the maximum term.

As an ownership structure, co-operatives contribute 18% of New Zealand’s GDP and one of the most important characteristics according to Scott is how they can take ‘the long view’ rather than seeking short-term commercial gain.

“The agsector is served by more co-operatives than most. Participation by working farmers is vitally important especially in the Board’s composition and determining its priorities. They can nominate candidates, they can run themselves and of course elect the directors that best represent how they think things should be governed,” Scott says.

Diversity of thought is important in any Board and while perspectives from those who are not actively farming are crucial, Scott says there are aspects of active farmer directors that make them valuable Board members.

“Common sense is essential to being a good Board member and working farmers have plenty of that and, since they use Ravendown’s products and services, they know how well the company is delivering.

“Anyone that runs their farming activities as a business can do it: the balance sheet and P&L are the same – the numbers are just bigger.”

Scott admits he was elected to the Board earlier than was comfortable as he was single-handed on his farm, but the experience gave an enormous boost to his career path.

“Being on the Board really changed my career. I knew what I was doing on the farm, but exposure to business and networks opened up new ways of thinking for me. It taught me how to see farming business differently.

“The ideal candidate might already have farm-staff to keep things running while they’re at Board meetings every six weeks or so, reading Board papers and emails, and talking with farmers.”

Looking back on his 12 years, Scott is proudest of helping engineer Ravensdown’s shift to the concept of smarter farming.

“Farming has been under social and environmental pressure for a number of years.

“We got in a little ahead of the game in spotting that what we did for farmers was central to these pressure points. If we developed smarter products and services, we could help them farm more effectively.  Getting an active farmer’s perspective at Board level on the company’s products and services and their delivery is of huge value to the company and I would encourage active farmers to consider standing for a director’s spot.  I can assure them that their value to the company will be significant.  It is a company of farmers for farmers.  If it is to continue to be successful, they need to participate at a high level.

“The new approach came at the right time for our shareholders and that, in a nutshell, is the point of having a good Board,” Scott concludes.

Nominations for directors on the Ravensdown Board are open between 17th July and 13th August. 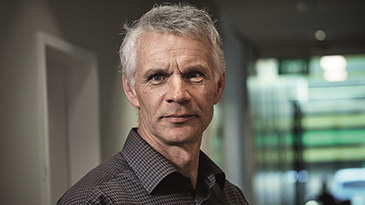