Irish dairy farmer Denis Finnegan is no stranger to New Zealand’s pastures. After a backpacking trip in 2006 and an organised farm tour in 2008, Denis is back for the North Island Pasture Summit Conference on 26-27 November, as well as a three-week tour of New Zealand’s top dairy farms.

“We are privileged to be going to visit the best dairy farmers in NZ. They’re the all-stars of grassland dairy farming around the world – they’re the ones we want to emulate,” says Denis.

The Ravensdown-sponsored Pasture Summit Conference is an Ireland/New Zealand initiative that looks at the cutting edge of pasture-based farming, the challenges the sector is facing and innovations for the future.

“If we want sustainable grass-fed systems to be economic and environmentally sustainable into the future we have to work together,” says Denis.

Denis farms 700 cows across four farms near Cork in the south-west of Ireland. He took part in the ideas committee investigating the possibility of Pasture Summit and why it’s important for Irish and New Zealand farmers and researchers to talk to one another.

“Only 5% of the world’s milk comes from grass, 95% comes from indoor systems. Maize has a budget of $5 billion a year going into researching the crop and maize yield is growing 3% a year. That means in time, even though grassland systems are the most efficient, profitable systems to produce milk, maize can compete,” explains Denis.

Pasture Summit was formed because we must come together to share our technologies, our information and bring all that intellectual property together to create something better.

Ireland’s traditional small-holding land use means farms often border villages, therefore there is an onus on the farmer to ensure environmentally sustainable practices are undertaken on farm. In the past, many of these dwellings would have housed tenant families or farm workers, however these days many dwelling owners connected to farms have no relation to the farm or its farmers whatsoever.

Denis expects the next decade to hold a wealth of change and opportunity for Irish dairy farmers to expand and refine their farm systems.

Ravensdown’s General Manager of Innovation and Strategy Mike Manning says that Pasture Summit will give both delegates and sponsors an excellent chance to share information and build on common experiences.

“The pasture-based system prevalent in New Zealand is unique in the world. Our temperate climate, soils, pasture species combined with our pasture management expertise has given us a feed cost advantage globally. While we are competitors, Pasture Summit offers a platform for the two countries to collaborate." 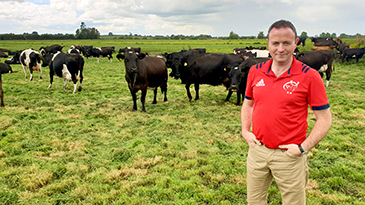 Christchurch site opens its doors for pick up