It's all about attitude!

The move from tourism to farming has not only led to a change in career for Thomas Lundman, 25, but a new long-term goal of combining the two.

In just his second season in the industry, Thomas is the 2022 Bay of Plenty Dairy Trainee of the Year. He entered the Dairy Industry Awards for the first time last season after just months in the industry, and surprised himself by coming second. The self-proclaimed perfectionist is not putting himself under pressure to win the national title.

“But I’d like to,” he says, laughing. “I like to do the absolute best I can and when you're competing against the rest of the country, that's pretty big.”

The 25-year-old is due to marry partner Alice Brogden at the end of the year. The pair made the move from Fiordland to Whakatane when the Covid-19 pandemic decimated New Zealand’s tourism sector.

After growing up on a dairy farm, Thomas was a team leader at the Te Anau glow worm caves looking after 30 staff working over five different locations.

“When I was younger, I always thought I would be a farmer. Then we moved into a tourist town and I fell in love with tourism. Then Covid happened, and I lost my job. We decided to move north to be closer to Alice’s family. I could have looked for a tourism jobs, which were like hen’s teeth up here, or fall back to farming. The more I thought about it, the more inviting it looked with a house, a freezer full of meat and a clear career path.”

The Brogden family own an agricultural contracting firm and after letting their contacts know Thomas was on the lookout for a job, the call came from dairy farmers Chris and Rosie Mexted, on Rushaven at Matata near Whakatane. They’re milking 550 crossbred cows on 140ha (system 5 with support blocks) and producing 280,000 to 290,000 kilograms of milk solids. 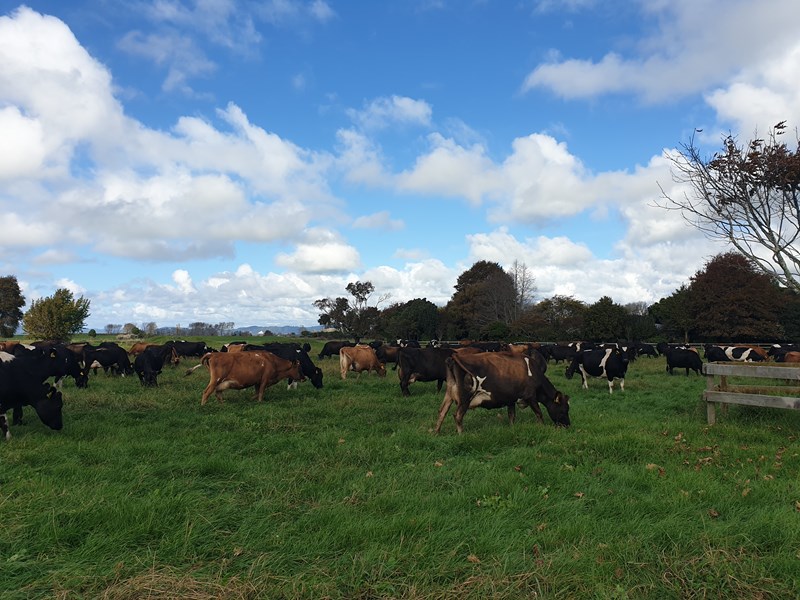 Initially, Thomas thought he would go farming for a few years while he waited for his police recruitment to go through. “But I cancelled that within the first six months. I just loved farming. I wanted a career that I could bring up a family with and this is just such an amazing lifestyle. I’m home every night. The hours are long but there is also give and take.”

He says Chris is an incredible boss and a patient teacher.

“I like to ask questions, and I don't think there's been a question he hasn't either researched an answer for or known straight away.”

In any career change, Thomas says it’s all about two things: your boss and your attitude.

“If you have an attitude to keep learning and be patient and take every opportunity, and you have a boss that is willing to incorporate that, then you're away laughing. There's nothing stopping you.”

When Thomas and his workmates lost their jobs at the glow worm caves, there were two others who went into dairy farming. “But I’m the only one left and I think that's because I got a good boss, and the others got overworked.”

The learning curve in his farming journey has been steep, but he’s grateful for the support of the reps who come to the farm, such as Ravensdown’s John McFadgen.

“They’re the experts, the ones with the in-depth knowledge; in John's case, I can ask him why we do soil tests a certain way, or why we put on different autumn and spring fertilisers.

“The Awards have been good for extending my networks and also finding the gaps in my knowledge so I can go and fill them in. I’m a long way from the Telford agricultural introductory skills course I did when I was at school, although it surprises me how much I remember.”

He's working through a Dairy Apprenticeship through Primary ITO.

His long-term goal, as mentioned, is to have his own business involving agriculture and tourism.

“Eventually, my very far away goal is to get to a place where I can have tourists on a farm and whether that’s accommodation or some sort of experience; there are a lot of things to do between now and then. Lots of learning. I’m still just building my farming foundation at the moment, but eventually I'll get back to leading people and incorporate that with my new passion. I love working with people, and I love making people smile.” 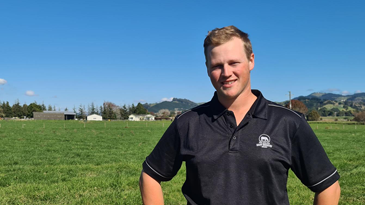 Thomas Lundman, Bay of Plenty 2022 Dairy Trainee of the Year

Back to In the Community