Entering competitions such as the Dairy Industry Awards and Young Farmer of the Year is all part of the farming process for West Coast dairy farmer Andrew Stewart.

He describes them as challenging and educational, as well as social, and encouraging valuable time outside the farm gate.

Andrew and Jill are 50/50 sharemilking at Taramakau, just inland from Kumara. The back of the farm is about 700m away from SH73 but the Taramakau River is in between, so it’s 17km back to Kumara to the bridge.

There’s also another 30ha of wetlands and kahikatea (white pine) bush fenced off around the farm, which totals 190ha. The farm is predominantly a grass-grazing system with bought-in hay and silage supplementing winter feed. Production is 350kg/MS per cow using a flexible milking regime.

“We're not the traditional twice-a-day, all-season farm. We milk once a day with a bit of twice a day during the peak, and then three in two [three milkings in two days]. It’s working better for us; we’re getting the production we need to get the dollars in the bank, and also gives us a bit of flexibility around being able to get off farm with the kids doing other things, not being tied to the shed twice a day.”

The kids are six-year-old Bella, who is at Kumara School where Andrew is a trustee, George, who starts school in November, and nine-month-old Tessa.

“We enjoy doing some of the small bush walks around the local area to get off the farm, and we also have a bach section at Fox River with Jill’s family, on the coast road just north of Punakaiki, so we try to spend time there when we can as well.”

A nurse by trade, Jill helps on the farm on an as-needed basis and a neighbour’s daughter is a handy relief milker.

Taramakau is a great little community, one the Stewart family has been part of for about 130 years.

There are seven dairy farms in the settlement running from the hills down to the Taramakau River, which has a seven-kilometre floodwall for protection (the annual rainfall in the area is 3.5 to four metres).

“There are a couple of other main creeks that run parallel with that river through the farms, basically the length of the valley as well, plus a few that pop up from springs.” 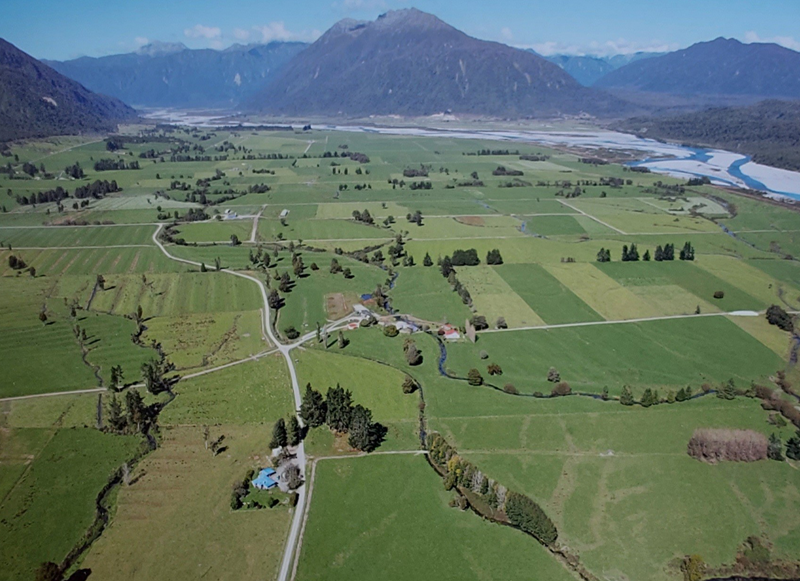 Andrew’s parents, Murray and Anita, are on the original Stewart farm, and bought the second farm in the valley in 2000, and also own a beef farm on the other side of the Taramakau River that Andrew’s brother farms. “I have a younger sister who is an early childhood teacher in Ashburton and then there’s us; we’re sharemilking at the moment to build our equity so we can take the next step.”

“When Mum and Dad bought this farm back in 2000, they also bought the Jersey herd at that stage. They’re lighter under foot on wet soil and pretty efficient at turning grass into milk for their size, as well as doing higher milk solid component, so we’re not sending a lot of water to the factory.”

The 38-year-old was a three-time Tasman Young Farmer of the Year regional finalist as a member of Grey Valley Young Farmers. Moving onto the Dairy Industry Awards this year seemed like a natural progression to challenge themselves, he said.

“We’ve just been ticking away on the farm and I felt I needed to do something to revitalize it for myself a bit… get questioned on what we’re doing and how we’re doing it. Some of the feedback (after the preliminary rounds) highlighted what we were missing; some we realised and some we hadn’t put too much thought into. That was part of why we entered: to see where we can improve.”

Andrew says he got dragged into Young Farmers as a young 18-year-old by one of the neighbours.

“I enjoyed it, and meet a lot of people that I wouldn't have otherwise, like going regional events and going off to Grand Finals as a supporter; the social side was quite good,” he says, laughing. “You get to meet a lot of interesting people doing other things and see what else is going on in the world, outside of your little world on the coast. I learnt a lot from my parents, and there’s a few people I’ve kept in contact with through Young Farmers, and throw ideas around with and chew the fat, people like Richard Reynolds, who is farming at Barrytown now. Meeting people through the Dairy Industry Awards is the same sort of thing, and will help us progress in the industry.”

He's supportive of Ravensdown’s involvement in both programmes.

The Stewarts’ good relationship with both of them has been important for the awards as well as for the farm, Andrew adds.

“We’ve used the nutrient management plans and soil information through the awards process to help us build the picture of what we’re doing and what and how we’re measuring.

If you're keen to get involved with NZDIA next year, drop your details below and we'll keep you up-to-date. 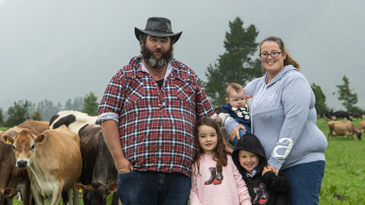 Andrew and Jill Stewart with Bella, George and Tessa