Katie Milne was the first female President of Federated Farmers in its 118-year history and served between 2017 and 2020. She advocated on behalf of farmers affected by M-bovis and helped spearhead the subsequent eradication programme. Most recently she argued powerfully to have primary sector businesses recognised as essential services during the Covid-19 lockdown.

New Zealand Guild of Agricultural Journalists and Communicators president Jackie Harrigan said Katie’s win was justly deserved as she had communicated skilfully and tirelessly during a period of extraordinary pressure and change in the rural sector.

“Katie is persuasive because she knows and believes what she talks about. She has convinced sceptical politicians, officials and public about the immense work that farmers are doing to improve freshwater, emissions, biodiversity, pest management and animal welfare.

“She has in turn convinced sceptical farmers to work even harder in all these areas on top of their essential work creating food for humans or livestock.

“Katie believes it is possible for New Zealand farming to prosper in an environmentally aware world, and those she talks to soon end up believing it as well.”

“Katie believes farming can always be smarter and needs to continue to improve. Ravensdown shares that belief and is delighted that the judges recognised how important her talent for communication has been to the sector.”

As the 34th winner of the Ravensdown Agricultural Communicator of the Year award, Katie receives a cash prize from Ravensdown along with the prestigious pounamu trophy.

“The secret is to believe in the indelible importance of the primary sector to New Zealand – farmers feed families - and to know first-hand the efforts of farmers to leave their land better than they found it.

“We do the best we can with the current tools, knowledge and resources we have available.  As our knowledge changes over time so do our farming practices - we need to trust our farmers to come up with innovative solutions to the challenges modern food production faces around producing more food from a carefully designed footprint,” Katie said. 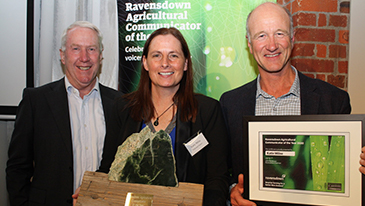 9 September 2020
Back to In the Community