Instead environmental efficiencies will be gained using a spectrum of tools and practices, backed by scientific data and supported by key partnerships within the industry, he says.

Ngāi Tahu Farming is the iwi’s independently-governed farming arm, with interests in dairy, grazing and forestry. They operate under the watch of 56,000 shareholders, which means they must remain accountable for every method and product they use on-farm.

A range of environmental initiatives have been undertaken with the project to help manage the impact of development, in particular around nitrogen (N) leaching.

“We want to know we are doing good things for the environment,” says Shane. “Our whakataukī (mission statement) for Ngāi Tahu Farming is Toitū te Marae o Tāne, Toitū te Marae o Tangaroa, Toitū te iwi, ‘when the land and water are sustained, the people will prosper’. Mō tātou, ā, mo kā uri a muri ake nei, for us and our children after us - that underpins the very essence of the business.”

He says Ngāi Tahu iwi have the expectation that through their involvement in farming, farming will be better off.

Not only will we show leadership where we can, but more importantly we will share knowledge, and kaitiakitanga - looking after the stewardship of the environment.

With N-use a major component in the conversion process, Ngāi Tahu Farming have been involved with several industry initiatives aimed at reducing nitrate leaching.

On farm, this has translated to a lower stocking rate, the incorporation of plantain into existing and new pastures, variable rate irrigation, catch crops, less imported supplementary feed and lowered N fertiliser application.

Shane says their use of N has become more tactical over time, and they now only use Ravensdown’s coated urea product N-Protect in their system, which helps lower the risk of volatilisation losses and reduce greenhouse gas (GHG) emissions.

“It is about being strategic in your use of N, and about asking if you really need it,” says Shane. “We use N strategically to create our feed when it is both low-risk and low-impact, to help set ourselves back up. With N-Protect there is a better return - you end up using less product overall because your utilisation rate is better.”

Shane says the next challenge for them will be seeing where the dust settles around new nutrient compliance limits in their zone.

“We live in a world of compliance, and I don't think that is a bad thing,” he says.
“But as an industry we have to lift our game and our image, because there is so much good stuff happening out there.”

He says embracing all the available technologies will be key in helping them come under their compliance targets and sharing that information with the greater farming community will be just as important.

“The tools take time to develop, but when they actually work the farmers will use them.
“Technology will get us there, but it will take time.

“I think we are a little bit fortunate in dairying - we don’t compete with our neighbour, we all supply milk to Fonterra and Synlait,” he says. “Effectively we are all in the same boat, so if we can share that information, we can all make the waka go a bit quicker.” 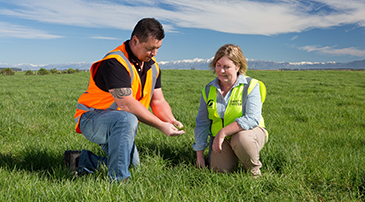 Primary Industry Women on the Rise