Hawke’s Bay sheep and beef farmer Bruce Wills has been elected the new Chair of Ravensdown as current Chair John Henderson concludes his term on 31 May 2022.

The former Federated Farmers national president is excited about the recently evolved strategy of the co-operative which is sharpening its focus on improving farmers’ and growers’ environmental and productive performance.

Bruce was voted in as a Ravensdown director in 2015, working closely with John Henderson who has been a director since 2004 and Chair since 2014.

“It’s been an eventful seven years on a Ravensdown board that, alongside the staff and management, have worked tirelessly towards a vision of smarter farming for a better New Zealand,” said Bruce. “I am passionate about Ravensdown’s role as the nutrient leaders in the areas of science, supply and solutions for an agsector striving for more sustainable ways forward.”

Bruce was awarded the Officer of the New Zealand Order of Merit last year for services to agriculture and the environment. He is also Chair of the Primary Industries Training Organisation, the QEII National Trust, ApicultureNZ and the deer industry primary-growth partnership.

“I’d like to acknowledge the incredible work of John Henderson who has been a stalwart leader in the sector, a shrewd director and a far-sighted Chair of the co-operative. Thanks to his efforts, guidance and accomplishments over the years, Ravensdown is well placed to serve its shareholders and move forward on the next stage of its journey.”

Outgoing Chair John Henderson had been scheduled to retire from the board last September having reached the maximum term of a shareholder-elected director but was asked by his fellow board members to continue for a further 12 months to provide continuity as new CEO Garry Diack took the helm.

John is particularly proud of Ravensdown’s focus on the science and technology behind its nutrient expertise. “In my time as Chair, the issues confronting the co-operative, its farmers and growers have changed dramatically. With considerable foresight, diligence and hard work, our team is confronting this challenge and establishing themselves as trusted advisors and chosen partners in the agsector.”

“Increasingly, Ravensdown solutions will assist the agsector in dealing with greenhouse gas emissions, water quality and productivity management - all for the sake of current and future generations,” added John. 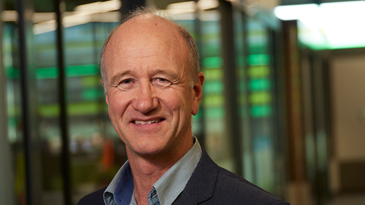 It's all about attitude!