Progressing towards our carbon reduction goals

Since joining the Climate Leaders Coalition in 2018, Ravensdown’s climate change mitigation has been producing some exciting results. Noteworthy success has come from our lime quarries in the South Island, which have been able to reduce  their reliance on coal by 65% and 54% for the Geraldine and Dipton quarries respectively. This represents a saving of 1,300 tonnes of CO2 equivalent to date, which is 9% of Ravensdown’s total direct emissions.

Three of Ravensdown’s seven lime quarries use coal to fuel the drying process.   Drying limestone produced 3,889 tonnes of greenhouse gas emissions in 2019, which is 24.6% of Ravensdown’s core annual emissions.  After setting its first carbon reduction target of 15% there has been a focused effort at Ravensdown to reduce coal consumption.  A roadmap for lime-related emissions reduction has been established, which represents the most significant area of progress towards Ravensdown’s climate targets.

Interim results reflect substantial efficiencies (full 2019 calendar year carbon footprint is due to be released in April). These have been gained by more selective mining, eliminating drying in favourable conditions and investment in improved infrastructure for screening, monitoring moisture and conserving heat.

These are really great opportunities, which have been identified by the operational team. They are practical improvements that will not only reduce carbon emissions significantly, but also drive efficiency in lime manufacture, build resilience and show leadership.

More work lies ahead to continue this exciting trajectory as the lime road map is implemented.  Continued investment and several trials are underway on various energy options and improved production processes, which means that further reductions are expected in the coming months.  A new crusher is to be installed at Geraldine in March that will reduce emissions of both coal and diesel in 2020.

The climate change mitigation work at Ravensdown’s lime works doesn’t end there.  Several areas of the quarries, which are either retired or will not be mined, particularly those with erosion prone land or ecological value, are part of a native forestry planting programme. The programme is designed to sequester carbon as well as offering ecological, biodiversity and aesthetic benefits to the local areas.

This work is part of Ravensdown’s wider sustainability framework, as described in its annual integrated report. 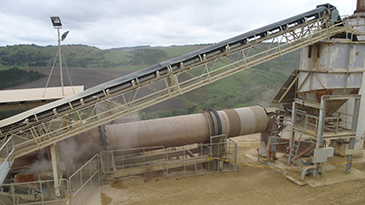