Farmers throughout the country are to benefit from our strategy, and focus on strengthening the balance sheet, as we report a record rebate of $50 per tonne.

​Ravensdown is paying out all its operating profit in rebate to shareholders who have bought fertiliser from the co-operative in the year ending 31 May 2015. A fully paid-up shareholder who applied 150 tonnes of fertiliser will receive $7,500 in cash rebate in August instead of the traditional September payment after the AGM.

“These payments will be arriving in bank accounts promptly and will be welcomed as the agri-sector faces some uncertainty in the current cycle,” said Ravensdown Chairman John Henderson.

“In the second year of our more focused strategy, we again made significant progress on the balance sheet front, so we were in a position to support those customers who need the cash and capital more than us right now,” added John.

"This is why our co-operative exists; to run an efficient, value-adding business so that we can help our shareholder owners when they are facing tough times,” said John.

“We will continue with the improvement to our stores and manufacturing network, but we do not have to ask shareholders for additional equity or investment to fund our planned manufacturing or operational upgrades,” added John.

Exceeding its strategic target of 70% equity ratio earlier than anticipated allowed the co-operative to pay a record rebate of $50 per tonne. The co-operative is virtually debt-free in 2014-15 compared to owing $355 million in 2012.

In 2014-15, the company also invested $33 million in capital improvements as part of its infrastructure upgrade programme, while achieving the best equity ratio for a decade and delivering $110 million operating cashflow.

The co-operative achieved its fertiliser tonnages target which held steady compared to the previous year and passed on price reductions throughout the year. Many products are at historically low prices such as urea which is the lowest it has been for eight years.

Ravensdown earned an operating profit of $51.9 million, despite one-off costs associated with the closure of Waikeratu’s lime quarry due to safety concerns. Exiting the Ruralco joint venture with ATS and the cost of dealing with two unsold Australian buildings impacted the bottom line result.

Greg Campbell, Ravensdown Chief Executive said that this was not a one-off result but built on the back of a solid strategy that has been working since 2013. “The first year we bounced back. The second year we are able to help all those farmers who stuck with us. We have momentum on our side and the morale of the team is high and all this gets noticed by customers,” added Greg.

As expected, after the exiting of all its loss-making Australian ventures, revenue declined to $716 million.

Greg Campbell remains cautious about trading conditions that may affect fertiliser tonnages in the current year, but is confident that the business fundamentals are strong. The co-operative would stick to its strategy of adding value by investing in operational efficiencies, in technology and in training so customer service and product quality stay on an upward curve.

“Investing in infrastructure such as new fertiliser blending plants, in new products and new features for award-winning Smart Maps will continue this year. All this growth can be achieved without going cap in hand for more capital from farmers or banks. It’s about living within our means.”

“When combined with our focus on agri-science and research, we’re seeing more customers expressing an interest in what Ravensdown can do for them,” added Greg.

During the past year, Ravensdown also built a team of local animal health and agronomy specialists and more certified nutrient management advisers now work for the co-operative than any other company. The environmental consultancy is also expanding due to increased demand.

According to Greg, in these tougher times, it’s vital that farmers engage with the team around nutrient budgeting, soil testing and animal or plant productivity.

Ravensdown will outline plans to continue investing in its core business at its AGM on 14 September in Dunedin.

Year ending 2014-15 at a glance
• Record rebate of $50.00 per tonne.
• All trading profit paid out to shareholders.
• No New Zealand debt. Highest equity ratios for a decade. $110m operating cashflow.
• Over $33m invested in infrastructure including new loaders, conveyors, roofing, laboratories and blending machinery.
• Funding its infrastructure upgrade with no additional capital requirements. 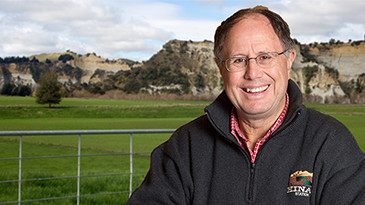