After months of hard-fought competitions across the country, the winner of the 50th FMG Young Farmer of the Year has been announced in front of a 1000-strong crowd at the grand final and quiz night at ILT Stadium Southland in Invercargill.

Logan Wallace of the Otago/Southland region has won the sought-after title, saying he was ecstatic to finally achieve his dream of winning. The 28-year-old leases his parent’s 290-hectare sheep farm near Waipahi, running 2300 ewes, 700 hoggets and 400 trading sheep.

Logan also took out the $6,500 Ravensdown Agri-Skills prize after a hard-fought practical day in the rain on Friday.

Ravensdown Deputy Chairman Stuart Wright congratulated Logan on his win and said Ravensdown were proud to round out their 32nd year of sponsorship for the competition with such a high calibre of finalists. Second place overall went to rural consultant Cameron Black from Aorangi region, while Bay of Plenty contract milker Josh Cozens took out third place and the Agri-Knowledge challenge.

The Young Farmer of the Year contest has come a long way from its humble roots as a radio broadcast in a small hall at the former Lincoln College but the heart of New Zealand’s ultimate rural challenge remains the same.

An edited version of the 50th grand final will be available on digital streaming service ThreeNow from July 14. 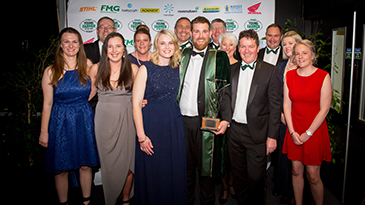