It is important to ensure those scattered weeds do not get the chance to set seed and fill the seed bank. Weed seeds can survive in the soil for a long time, setting itself up to take advantage of opportunities in the future to germinate and establish a new population of weeds. This reduces the production and quality of pastures and shortens their productive life by effectively depriving the pastures the ability to absorb nutrients, water and light.

Topping and grubbing can work for some weeds, but with others you risk regrowth from the roots or crown, and it can be costly, time consuming and soul destroying. A grass-friendly herbicide for spot spraying broadleaf weeds is usually a more cost-effective and time efficient option.

Clopyralid (Multiple) at a dilution rate of 25ml of Multiple to 10L of water for knapsacks or quad-bike/ATV sprayers is usually the most cost effective option if you’re targeting thistles, such as californian, nodding, scotch, variegated or winged. Whilst it will kill clovers, the clovers are only affected in the spot where the thistle was, and clopyralid does not have long term residual activity in the soil so it will not be too long before clovers can recolonise the spot. Even when boom spraying patches of californian thistle, it is surprising how quickly clovers will recolonise treated patches. It is better to be able to graze the grasses present even if the clover is absent for a period, as livestock will avoid grazing in the patches of Californian thistles. Alternatively, clopyralid is also very good for weed wiping Californian thistles. Research at Massey University has shown a single pass at 500ml/10L in the weed wiper can be just as effective as a double pass at the label rate of 250ml/10L.

Other broadleaf and brush weeds

For most broadleaf weeds no additional surfactant/wetting agent is required, but if you are targeting brush weeds then results will improve with the addition of a quality organosilicone penetrant such as Accelerate. This reduces the rainfast period and improves plant uptake. If brushweed infestations are not too dense, it is surprising how much ground can be covered with a good, motorised pump and handgun set up with power hose reels.

It may be tempting to use metsulfuron (Eradicate) when spot spraying, as it is a very low cost option and also controls a very wide range of broadleaf and brush weeds, but it will damage most pasture species. Great care must be taken if metsulfuron is going to be used without leaving unsightly bare spots in the pasture. In the long term this can be counterproductive as weeds will eventually re-establish in those bare spots.

Tip - Adding a neutral spray marker dye (Assist Easy Red) when spot spraying will improve the efficiency of application, making it quicker and easier to avoid misses or doubling up.

Metsulfuron is a very cost-effective option for ground boom or aerial spraying of larger infestations of brushweeds, especially gorse, matagouri and blackberry. Some grass species, such as browntop, are tolerant of metsulfuron. Because metsulfuron is relatively lower cost than some other options, the money saved can be used to improve soil fertility so that when the brushweeds have been controlled and improved pasture species are introduced, they have a better chance of establishing and the pasture is less likely to revert back to less productive species.

Triclopyr + picloram is also a good grass friendly option for aerial or ground boom spraying of larger infestations of brushweeds, especially gorse and broom. This is often a preferred option in better country where pasture quality is already good and brushweed infestations are not so dominant but too much for spot spraying to be a viable option. 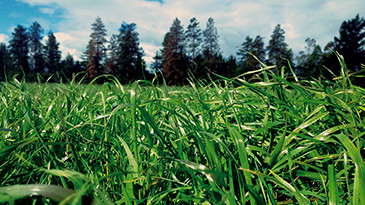