As the COP Climate Change Summit concludes, a New Zealand farmer-owned co-operative has showcased new methane mitigating technology that the dairy sector can start using from today to reduce emissions.

The breakthrough discovery was to target methane with an additive normally used in the treatment of drinking water. Ravensdown and Lincoln University collaborated in the science that underpins this new technology and Ravensdown will provide the system to dairy farmers wanting to reduce their methane emissions.

“The New Zealand dairy sector is already a world leader in its carbon emissions efficiency, but the country has set a 12% target of biogenic methane reduction by 2030,” said Mike Manning, General Manager Innovation and Strategy. “This new tool in the farmer’s toolbox has the benefit of robust science behind it and will assist farmers who want to start tracking towards that target now.”

A computer-controlled pump and mixing system precisely administer the exact amount of iron sulphate - a safe additive used in the treatment of drinking water. The automated “plug and play” in-line system, which can be retrofitted to existing effluent systems, also reduces odour and risk of phosphate loss from pond effluent when spread on farm.

LU Emeritus Professor Keith Cameron explains that effluent ponds are an important part of a dairy farm system in order to recycle nutrients and help meet environmental rules as set by regional councils. “The larger the pond, the more micro-organisms in the pond to generate methane. This new system has been tested in the lab and at farm scale, where it proves enormously effective at essentially nullifying the methane-creating process.”

“We also found that EcoPond reduced the risk of Dissolved Reactive Phosphate loss to water by up to 99%,” adds LU Professor Hong Di. “This means that this essential nutrient can be recycled with reduced risk of water contamination. The EcoPond system also strips out E.coli so that the dairy effluent is much safer to irrigate to pasture.”

“Next year, farmers will be responding to the government’s reaction to the Climate Change Commission as well as the new way to account for their own emissions,” concluded Mike Manning. “In this GHG space, our owners need tested solutions at pace and this is what this collaborative venture represents. As a co-operative, we take the initiative on their behalf so they can continue to choose to produce within their environmental commitments.” 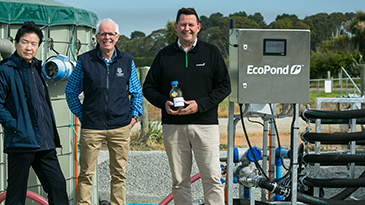